From glum to glam in a pink cami

I’m continually amazed at how clothes can take you from glum to glam in the blink of an eye.

I was feeling so revolting this morning with lots of emotions overwhelming me but after I glammed up a little (and I have no place to go other than school pick up) I felt a million bucks!

Yesiree, and who would have thought a pink cami with a doily on the front could help do it.

Goodies from the smalls draw such as cami’s and silk slips are very much in vogue. Louis Vuitton is leading the pack with this divine creation (Victoria Beckham is wearing it superbly on the right). 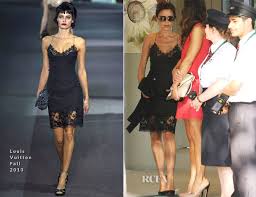 I threw my cami on with Pink Stitch stonewash jeans, a long fur jacket and added a touch of metallic with these Betts croc print heels and Lovisa cuff.

The clothes put a spring in my step but I have to admit it took a bit more to bring peace and order to my frazzled mind today. It also took spiritual warfare, prayer and meditating on a couple of juicy scriptures (namely the one featured on this post).

Its been very quiet this month in television and film land but my agent just asked if I can work on a television commercial Saturday evening. If I get the gig, I guess that’s the social life out the window! Have a great weekend; and now you’re Looking Good Girls!

“You will keep in perfect peace him whose mind is steadfast, because he trusts in you. Trust in the Lord forever, for the Lord, the Lord, is the Rock eternal.” Isaiah 26:3-4.